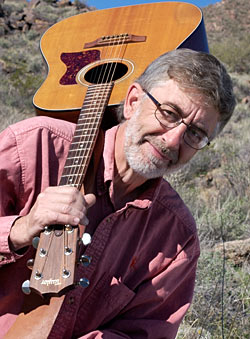 By intrinsic definition, Folk Music is just what it sounds like: music of the people. The songs of R. Mark Fogelson capture this essence of traditional Folk by focusing on human stories, emotions and triumphs. His songs hearken back to an era when storytellers handed tales down through generations, yet they remain powerful commentary about the rapidly changing world in which we live. At his live shows, Mark explains to the audience how each song came to him, and listeners are truly captivated by his narratives. His songs range in theme from family, such as in Sometimes it Seems, to new beginnings, as described in Plant New Dreams. Mark also brings smiles to audiences' faces with songs such as If Jesus Was Norwegian and B.S. Song. Listeners find his music approachable, heartwarming, humorous, and thought provoking. So sit back and listen to the quiet stories and emotions that linger in his songs. Venues Coffee houses, retirement parks, folk festivals and conventions all around the Phoenix metropolitan area. Recordings Dance Your Dream, 1996 Plant New Dreams, 2004 Airplay Public radio in the Twin Cities, Grand Rapids, Moorhead.
KDSU (Fargo, North Dakota)
Featured on The Morning Show with Dale Connely and Jim Ed Poole.
Public Radio throughout Minnesota Contact R. Mark Fogelson
480-671-5392
301 S. Signal Butte #321
Apache Junction, AZ 85220
RMarkMusic.com
rmark@rmarkmusic.com